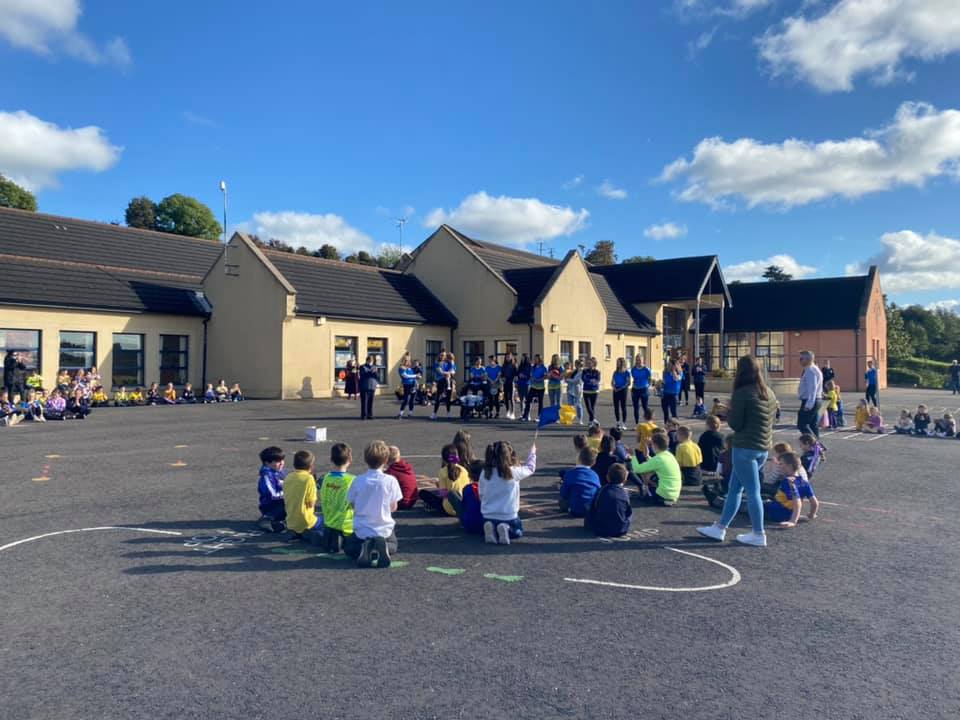 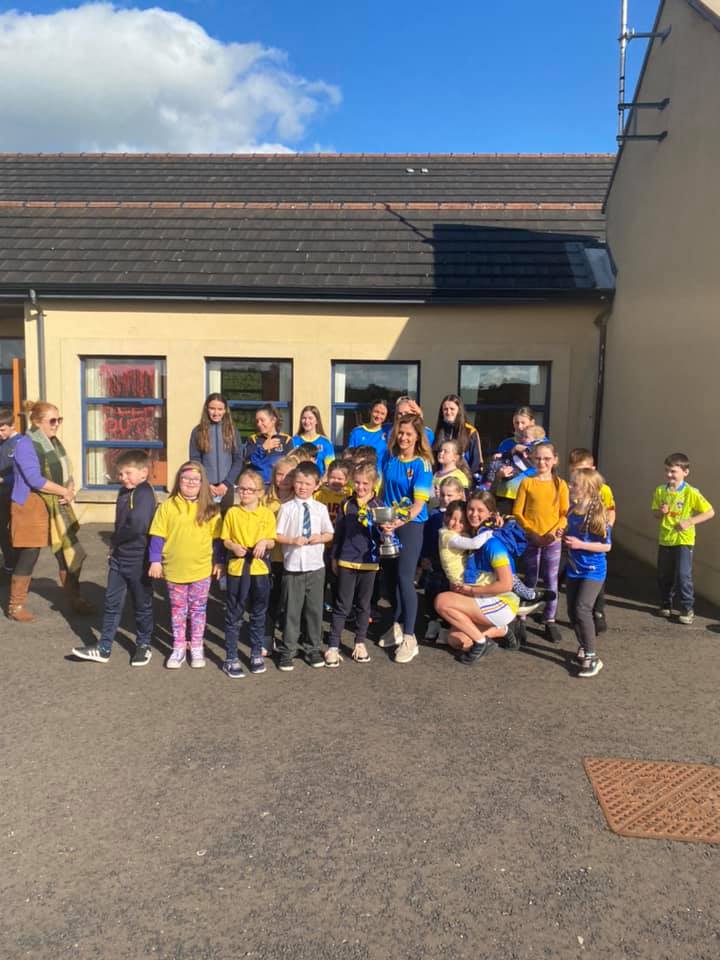 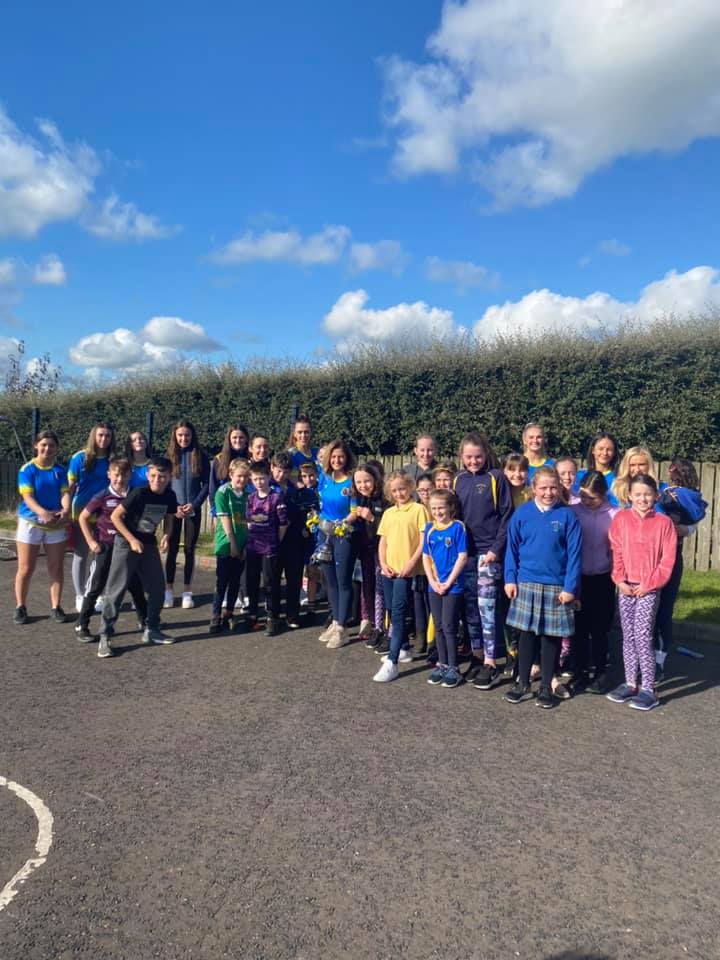 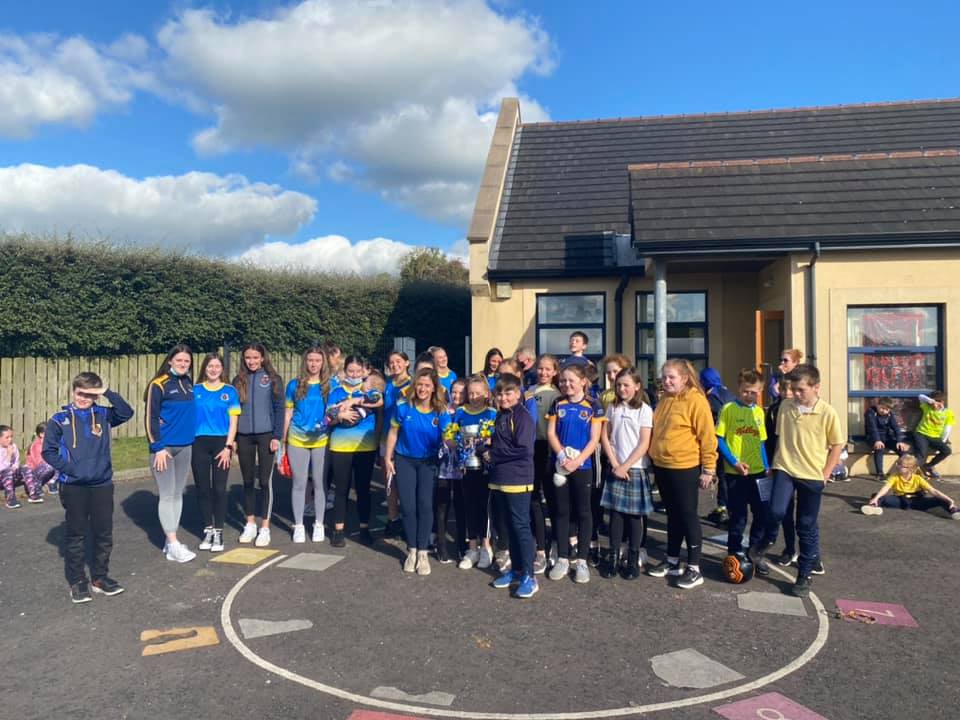 First and foremost we hope that our pupils, parents and all in our school community keep safe and well during these unusual and uncertain times. We thank you for your help in supporting your child’s/children’s learning during this period of school closure. These two years were a mix of in school, learning in pods, and parents teaching at home, supported by emails from their teachers.
The pupils missed out on school tours, and are hoping to get two tours next year.

Dernakesh is a national school which is situated about three miles outside of Cootehill, Co. Cavan, Ireland. There are approximately 165 students in Dernakesh aged from four years old up to thirteen years old. There are eight teachers, two of which are resource teachers. Our school principal is Mr. Aogan Farrell. We do many sports including Gaelic football, camogie, hurling, basketball and volleyball. Our school is very close to our local G.A.A club, Drumgoon in which we take part in many activities together. Our school is going to be renovated in the summer 2002. There will be many new things such as a new sports hall, new car park and new classrooms.

The Killian O’ Connell Tournament was on the 11th of May 2002. It was the fifth annual tournament. It started with under 10’s, under 12’s and the girl’s school’s team. Cootehill, Kill, Shercock and Ballyhaise for the girl’s were also there. There was a great turn – out. At 2.00 o’ clock, the dernakesh girl’s played Ballyhaise. Straight from the throw in Dernakesh had all of possesion of the ball. At half- time Dernakesh was in the lead by a big score. In the second half Dernakesh put up a good fight to stay in the lead . When we heard the final whistle we knew that we won. We got lovely trophies presented to us by Edward Jackson the captain of our senior men’s team. The under 10’s won the Mary Ann Sherry cup. The under 12’s won the Killian O’ Connell cup and the girl’s won the Killian o’ connell shield. It was a great day out .

On the 21st of April, St. Michael’s Church, Cootehill had four school’s received confirmation, Dernakesh, Tunnyduf, St.Michael’s, Cootehill and Knockbride West. All received the gifts of Wisdom, Understanding, Right judgment, Courage, Knowledge and Wonder and awe in God’s presence, and the fruits of Love, Joy, Peace, Patience, Kindness, Goodness, Trustfulness, Gentleness and Self-control. Bishop Leo O’ Relly said Confirmation. The children in my class went two Gallray, The White Horse Hotel and their own homes, everyone had a good day.

On the 11th of May the 5th annual Killian O’ Connell tournament was held. Killian O’ Connell was a pupil in Dernakesh when he died tragically in 1997. The first match was Drumgoon school team v Kill school team. Drumgoon played a brilliant match and beat kill by a big score. Next the Drumgoon boy’s U.10 played Shercock U.10 Drumgoon boy’s played very well and so did Shercock putting up a good fight but in the end Drumgoon were the best team and they won.!! It was the second semi final Cootehill v Kill. Cootehill won and were in the final against Drumgoon. Drumgoon won it. Next was the Drumgoon school girl’s V Ballyhaise school girl’s. Drumgoon played very well especially the back’s who didn’t let ballyhaise put a single point over the bar but Drumgoon scored plenty. And they also won. There was a little break after every match. There was a shop there and a place were adult’s could get tea and sandwich’s. After the game’s were over there was a presentation of trophies and medals. The Drumgoon school boy’s won the Killian o Connell cup. The Drumgoon boy’s U10’s won the Mary Ann Sherry cup and the Drumgoon girl’s won the Killian o Connell perpetual shield. And the runner up’s got medal’s. We had a GREAT day!!! On the 11th of May the 5th annual Killian o Connell tournament

Our locality is hidden away in northeast Cavan surrounded on all sides by the Drumlins. Here in Maudabawn we have wonderful school with one hundred and sixty two pupils and seven teachers. We also have a cultural centre, which regularly hosts history talks and has excellent computer facilities. Other community enterprises include Gallonray house. The facilities here include a lounge, playgroup, ballroom and a meeting room. Our local football pitch Boyle park is the place where many locals spend there spare time. Here they play and watch many football games. During break-times at school pupils take full advantage of the school football pitch. The GAA is a main part of most peoples lives in this area. Thanks to the GAA this community has been brought closer together. In our school all of the teachers encourage Gaelic football. Our local GAA teams have won many cups and awards but it would be lovely if the collection were to be doubled in size.

DRUMGOON 1 – 14 BELMULLET 0 – 12 It all started on the 30th of September 2001 when Drumgoon reached the County Junior Football Final. They were to play Kildallan. Drumgoon reached the final in 2000 but were beaten by Cornafean . The Drumgoon v Kildallan match was very exciting, especially for Drumgoon who had never won a Junior final in Gaelic football history. Drumgoon beat Kildallan with a score of:1-10 to 0-7. The captain on the day was Martin Clerkin. The next round was to play in a tournament. The tournament was the Paul Kerr tournament. Drumgoon were to represent Cavan. The next game they had to play was against a team from Newry, Co.Down in the quarter final, but that match was cancelled which then meant that Drumgoon were through to the Ulster Final. They played a team called Doohamlet from Co.Monaghan on Monday 18th March 2002. It was another exciting match but Drumgoon won again with a score of: 1-13 Now Drumgoon were through to the All-Ireland Semi-Final. They played An-Tochar from Co. Wicklow on Monday 1st April. An-Tochar were a very strong team but Drumgoon came through in the end with a score of Drumgoon were now through to an All-Ireland Junior Final. The Parish of Drumgoon was covered in blue and yellow, the team The day eventually came, 18th May 2002. The team and the team managers were both nervous and excited but mostly looking forward to the big game. At 5.30pm on the 18th of May 2002 in Shamrock Park Cremartin the match began between Drumgoon, {Cavan} and Belmullet,{Mayo}. Belmullet had a good start with three points to no score but Drumgoon came back and at half-time were leading 0-8/0-6. After half-time the two teams were battling it out with some great scores. Drumgoons centre half-back, Micheal Andrew Hannon, ran up the field to take his point but the goalkeeper knocked it out. Drumgoons captain Edward Jackson was the quickest to react and put in the back of the net. We knew we had it then. The final score was 1-14 to 0-12. Edward Jackson proudly lifted the cup. Teams in the All-Ireland Match: Drumgoon John O Reilly, Martin Clerkin, Colm Hannon, Jimmy O Reilly, Paul Mc Enroe, Micheal A. Hannon, Keith Fannin, Edward Jackson Capt., Jim Mc Nally, Philip Mc Dermott, Ian O Reilly, Adrian Crossan, Bryan Bates, Paddy Mc Cabe, Seamus Morris. Belmullet: David Padden, Ian Mc Cafferkey, Cathal Healey, Eamonn Dixon, Pauric Keane, Derek Mc Donnell, Kieran Lavelle, Paddy Barrett, Johnny Sweeney, Andy Howard, Billy Joe Padden, Stephen Carolan Capt., Brian Lynch, Micheal Gaynard, Tony Geraghty.